There’s an under-appreciated feature in iOS9 that reports on the amount of battery used by app over the last week or so1. Casually browsing the list one evening, I noticed that the Moves app – seemingly abandoned after the team was acquired by Facebook – was eating upwards of 40% of my battery. Needless to say, I deleted the app; I had moved mostly to using the data from the cheap-but-more-accurate Mi Band anyway.
One feature I’m missing now without the Moves app is actually its geolocation data, which was also its main battery drain. The Moves app had access to the phone’s built-in accelerometers for step-tracking, but with GPS data it was able to draw out maps of where I’ve been. The GPS data had just enough fidelity to guess the type of transportation (walking, biking, riding a car), and cross-referenced with Points of Interest data can approximate the places I’ve visited.
It looks like this: 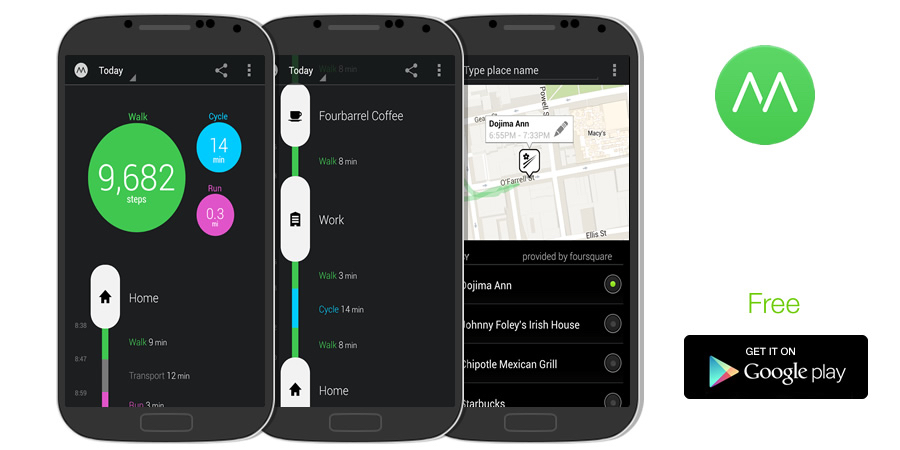 The utility simply comes from having a running diary of personal location information. For me, it’s helpful to know approximately when we left the party, or about what time the baby slept in the car by triangulating the outside scenery, or which of the 4-5 errands I’m running today were already done. That the data is automatically sent makes it more useful for this type of backtrace, as opposed to fitness trackers which require going into “GPS run tracking” mode or Siri/Google Now integrations that read from emails and calendars.
—
After writing the above, I figured that Google must be doing its own location tracking, particularly since it’s so useful for Google Now and went looking to confirm my suspicions. Lo and behold, they rolled out a new Timelines feature for Android and web a couple months ago, which accomplishes much of what the Moves app did, with additional functionality piped to other Google services as an added bonus.
That said, the functionality does not yet exist in their iOS app, and the web data they do have about my travels for the past 2 years is woefully incomplete. I wonder if it’s because I don’t launch Google’s apps much outside of Maps, or that they are purposefully not reading GPS data frequently enough to piece together day trips; Android’s integration must be much better.

How Long Will we Keep Typing?

Computing, TechnologyOctober 12, 2015
I’ve been playing through an old PC game – The Typing of the Dead: Overkill. It takes one of the campiest light-gun shooters (featuring zombies), and replaces shooting with the Wii-mote with typing out phrases on-screen, where each successful completion …
END_OF_DOCUMENT_TOKEN_TO_BE_REPLACED

What career advice should I give to my baby boy?

The Demise of Lyve

Hardware, ServicesOctober 10, 2016
Guess I called it. I just got the email last week that Lyve is shutting down. It started as a somewhat unique proposition around owning your own storage and interface around photos, which eventually had to be sold to a …
END_OF_DOCUMENT_TOKEN_TO_BE_REPLACED
2