Social Gaming is About Business

It’s now cliché to claim that gamification permeate all aspects of life; the talk of 2010 and 2011 was that everything seemed to be heading towards cheap, immediate-reward schemes with the subtlety of slot machines. If it can drive the multi-billion dollar click-based engine behind the biggest tech IPO in history, it’s good enough for everything else.
But now and again the social/casual gaming industry likes to remind us that it’s in the business of making money and precious little else. Unlike the traditional console/PC gaming ecosystem, the social gaming space has barely any “indie” movements, while those who stumble across a modicum of success will milk it for all its value, as game mechanic thievery and IP-ripoffs proliferate.

I was there right in the beginning. As one of the first engineers at Lolapps, I was making another one of the seemingly endless waves of disposable, yet enchantingly profitable Facebook apps plaguing walls and news feeds. The success of Mob Wars{{1}} and its ilk prompted us to shift over and try for a slice of that revenue stream; after all, in the early days, all a game needed was an artist, a few developers, and a buttload of memcache and MySQL servers{{2}}.
With roots firmly entrenched in the greenback, it’s not a surprise that the biggest game makers were simply the ones who had the best business acumen, and outsiders (e.g., Electronic Arts) often had to resort to buying insiders (e.g., Playfish) who knew how to manage the business side. Themes, mechanics, tutorials and features were liberated across the industry because these they were, at best, tangential to success: what mattered was getting the UI optimized for virality and user spend, the cost of acquire new users via aggressive ad campaigns, and what sorts of cross-game promotions were effective at driving traffic. Gameplay was literally governed by a spreadsheet of item costs and player levelup curves, tuned to keep players just out of reach of prestige.
I eventually left Lolapps in early 2010, deciding that I had enough of social games to last a lifetime. I knew a lot of people with the company had the best intentions in making games that weren’t carbon copies of the competition; in fact, their first major release – Ravenwood Fair – was lauded for its high production values and originality in a sea of aquarium clones. That said, I felt that the industry will eventually force the firm down a dark and irreconcilable path, but I was also hoping I’d be wrong and they could turn a tidy if inconspicuous profit. 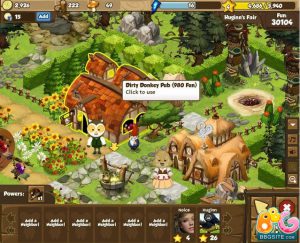 And for a while, they seemed to be doing great, pioneering the way of game expansions on Facebook. This January though changed that opinion – I was reminded by just how much of a business the social gaming phenomenon really was. The recently-merged 6waves Lolapps was sued by SpryFox, a small indie developer, for the outright theft of their game: from the interface to the steps in the tutorial down to how much it cost to buy item upgrades. If the reports were true, it would have been a completely cold-hearted, unethical, but logical business decision.
Fast forward to today, and 6Waves Lolapps laid off all of its game production staff – the artists, game producers, and engineers who were building the Ravenshire franchise were all let go, and the CEO had a prepared statement to the press an hour later. It was then I knew the suits have won, at least for my former shadow of an employer; at a time when most game studios are trying to hire developers, 6L is cutting its most valuable talent so it can expand its profile as a publisher and reap the profits off its solely business maneuverings. They couldn’t make the gaming moves with the same gusto and fearlessness as Zynga{{3}}, and are now forced become a publisher, whose main value add is the number of banner ads (with revenue share, of course) they can offer to game builders.
So if you make social games{{4}}, make sure you’re in it for the money. If you’re just passionate about games, the revived indie gaming scene and recent developments with kickstarter-funded titles is very encouraging – they demonstrate that gamers do care about the quality of their gaming experiences and are willing to support earnest efforts with their wallets.
All without letting a spreadsheet dictate your next move.
[[1]]Mob Wars was to my recollection the first social game which employed the friending, gifting, credits-purchasing and energy-constraining mechanics that every other “social” game has used since. It hit all the right notes and was, in true web 2.0 fashion, the work of a teenager who didn’t know to copy others.[[1]]
[[2]]I originally wrote about the industry’s transformation in more visceral detail two years ago, upon my departure from Lolapps.[[2]]
[[3]]To be fair, the list of companies that competed on that level can be counted single-handedly.[[3]]
[[4]]I wanted to say, “if you want to make social games”, but those that actually do care about the real social aspect of gaming are better served with indie games than what’s currently masquerading as “social”.[[4]]

Right Talent for the Job

GamesOctober 5, 2020
It was an accidental, but masterful timing when Nintendo released their new fitness game, Ring Fit Adventure, last October. It was initially received as another quirky game from the company, one that took advantage of the portability of the Switch’s …
END_OF_DOCUMENT_TOKEN_TO_BE_REPLACED