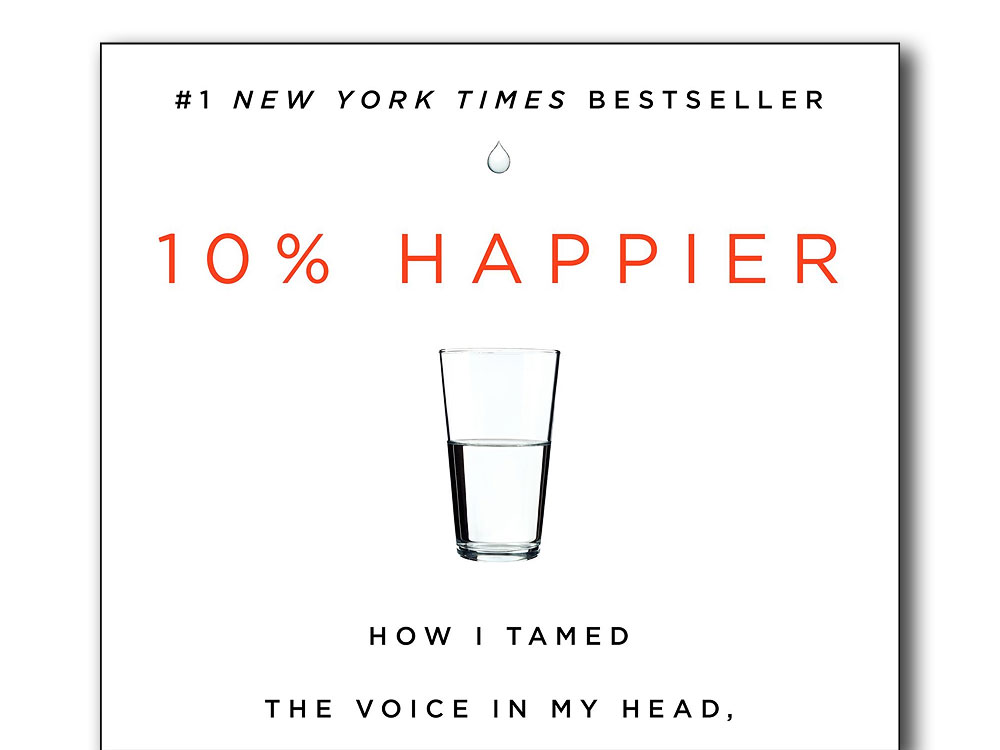 Within my Things to-do lists, there’s a project category dedicated to books I come across, most of which eventually make their way to my Kindle. My reading habits come and go—tracked by the amount of reading mini-reviews chronicled here—but like most the reading list grows faster than I can consume it. Having an extensive backlog of good books to read is great, but it’s easy to lose track of why I thought the book was interesting in the first place.

This was how I started reading 10% Happier: on a whim. I had honestly forgotten what the book was about, but some form of self-improvement, even if it proves hokey and aspirational more than practical, felt like a good palate cleanser after the intensity of thought-provoking science fiction. I expect most self-help books to dispense completely worthless advice, and so I was prepared to move on on the first sign of insufferable evangelism or grandiose promises.

The book is about meditation. Coincidentally, this area was something I was intellectually curious about, more from a skeptical “how does sitting around for a bunch of time everyday not doing anything actually make you a better human being” point of view. While on break between jobs, I had even aspirationally jolted down a plan to investigate and try out meditation. I got as far as downloading an app called Headspace; the app had not been launched by the time I started by new job at Affirm. Yet, somehow 10% Happier kept me engaged long enough to deliver its punchline.

Dan Harris, the author, works for ABC as a news anchor and correspondent, and spends much of the initial chapters playing up the stress of his job and the mental fatigue that came from his competitive nature and line of work. He details an experience where he had a panic attack live on-air that started a downward spiral towards drugs and escapism, but I found that hard to relate to, as it’s not exactly a commonplace occurrence. If anything, his writing style and descriptions of what it’s like as a TV personality were the threads that kept the book from being an overblown narcissistic exercise.

When he got to the parts about learning about Buddhist philosophy and meditation, I really appreciated how he started skeptical and stayed pretty incredulous throughout most of his journey. Even if it’s a literary trick, it feels more like how someone would actually respond to the idea in reality: “this could be interesting, but no way it actually works.” Dan doesn’t presume his readers have already bought in, and if we’re going to be convinced we’ll have to follow the same journey as he did, asking hard questions along the way. I’ve always found empathy to be a stronger argument over authority.

By the end of the book, Dan had tipped me over to at least trying out mediation to see if it made any difference whatsoever. I liked that he wasn’t overtly trying to sell anything with his book1, so I was actually slightly disappointed to find, for writing this review, that he actually did start a small startup to try to cash in on his success. That said, though, I’m pretty adamant on not paying someone for what should ultimately be an introspective practice, so I’m sticking with beginner and basic instructional apps and videos. On a meta-level, I’m pretty sure the Buddhist philosophers who invented most of this wouldn’t have appreciated the blatant commercialization of their discoveries.

So I’ve been using Headspace for a couple of days now, taking 10 minutes a day to sit at my desk with eyes closed and headphones on. No crazy revelations yet, but I’m determined to at least stick it out for 2 weeks and then evaluate effectiveness from there. It’s a low amount of time commitment, and there is a slight positive feeling of muscle relaxation at the end of it that I’m not sure can be completely explained by the placebo effect. In the domain of self-improvement processes and investments, this may be one where the potential for betterment outweighs the costs of experimentation.