The Luxury of Simple

I’ve been spending the past fews days helping my parents unpack after their first move in over a dozen years. On top of the weekend I spent over Thanksgiving moving out of my old room and the subsequent holidays me and my sisters will spend unpacking boxes and unwrapping bags, I estimate it’ll take upwards of a year to settle them into their new home. 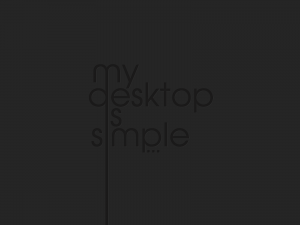 A lot of the – what we’ll call my parents’ collection – is acculumated junk from our past places of residence, many having seen 4, 5 moves across decades. These are not sentimental trinkets or family pictures; I’m stashing away tape older than Justin Bieber and a set of staplers that collectively summarize 20th century geo-economics. My parents, though, refuse to throw anything away, and I keep on looking for closets and bookshelves to preserve wholly unremarkable history.
I’m struggling to have my parents understand how to keep only what they need; their responses are along the lines of such and such being on sale, that it would come in handy eventually, or that they simply haven’t had the time to use everything they’ve bought. It’d be easy to dismiss their attitude as hoarding, but I think there is a something deeper they’re trying to communicate.
That is, they simply haven’t had the luxury of simplification.

Life is complicated. It takes time and effort to simplify our complex lives, and in doing so we’re consciously making tradeoffs to our lifestyles. It’s somewhat implied, though, that we can afford these tradeoffs, as almost always the simple option is more expensive – in terms of time, energy, or actual dollars. For those with precious little of each resource, going through the exercise of figuring out what to remove must be difficult and unsatisfying.
Take owning a car. The most obvious “complicated” situation would be doing all the maintanence personally, but it’d require keeping all the tools and parts plus a lot of time{{1}}. A simpler option would be taking it regularly to the shop, but of course you’d be paying more for someone else to do the repairs. The simplest option may be having no car, but that merely makes other aspects of life – like getting groceries or picking up someone from the airport – more complicated, not to mention that living within walking distance of amenities is itself a costly expenditure.
I wonder if the same argument holds in software. Simple isn’t easy, and minimalist/optimized software setups are either just hiding layers of complexity or took substantial effort:

The average user of our software systems really only cares about is getting his work done. Our apps don’t have to be fancy; they don’t have to be minimal; but if they are to simplify, there is so much more room untangling incumbent processes in industries that have resisted the efficiency of technology.
[[1]]Here, I’m painting car maintenance as more of a chore than a hobby.[[1]]

ThoughtsDecember 29, 2019
2019 marks the end of the second decade in the 21st century. I’m going to resist the temptation to do the thing where you look back at the past 10 years and try to sum up 3652.5 individual days into …
END_OF_DOCUMENT_TOKEN_TO_BE_REPLACED

ThoughtsJune 14, 2021
As I’m writing this, the US has vaccinated around 40% of our overall population, and the Bay Area is doing even better at with many counties at 50% or more. With the beginning of summer here, most activities—both outdoors and …
END_OF_DOCUMENT_TOKEN_TO_BE_REPLACED

Management, ThoughtsSeptember 13, 2021
Software engineers will sometimes talk about the craft of software development. The term invokes a sense of art and skill cultivated over years of experience and tribulations, and certainly sounds cooler than framing the act of building software as continuous …
END_OF_DOCUMENT_TOKEN_TO_BE_REPLACED