Simcity 2000 was a hell of a game for a 10-year old. It introduced me to the idea of using computers for simulation. That there’s wonderful complexity in the interaction of systems. And that cities, even in a super-simplified abstraction, are pretty hard to build and maintain. I remember trekking out to friends’ houses every week to spend a few precious hours working through the game, and when I wasn’t playing, I was reading the thick instruction manual over and over again to paper craft strategies in vitro.
Since then, I’ve went through everything from Caesar IV to the Civilization series to Transport Tycoon to many of the later Simcity entries. These games all emphasize building from nothing, and then dealing with the problems that crop up from humanity, whether it’s pollution or social unrest or land use. None of these looked to mimic reality in any passable way, but they presented powerful and creative digital playgrounds, where scores correlated roughly with the how gentrified nature became under the powers of the omnipresent player.
Cities: Skylines is the latest game that enables the building of something from nothing. It’s an unabashed city builder, in the vein of the old Simcity games1 designed for modern hardware. This means:

Granted, some of these features were more game design decisions than faster CPUs + GPUs, but in aggregate they make the game feel like a more expansive, better-realized Simcity derivative than anything I’ve played since Simcity 4.
At the same time, I’m finding that I actually like the choices the developers made around its systems. Specifically, City: Skylines is about transportation; many of the construction options in the game revolve around getting people from Point A to B. And while there are nods to things like garbage collection and education and healthcare, they’re much less nuanced (e.g., the buildings are less expensive, so there’s less of a tradeoff between small local buildings vs. large regional ones) and many of these auxiliary systems use transportation as a gameplay mechanic (e.g., firefighters have to drive — following the rules of the roads the player lays out — to the scene of the fire).
With the focus on roads and subways and services that participate in the transportation network, the game only really gets going when there’s enough traffic and people to make commutes interesting. Whereas Simcity kept gameplay tense with money and disasters, Cities encourages players to build metropolii, stacked with vertical commercial districts and heavy polluting industries and sprawling residential suburbia. The interaction between all the parts of the city underscores the core gameplay. 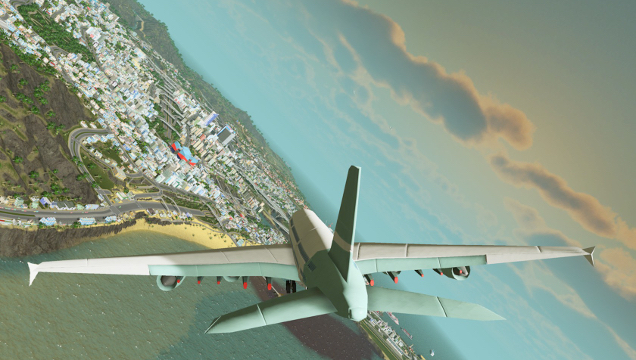 And traffic engineering is one system that’s somewhat immune to infinite money hacks and clever map designs2. Roads have capacities, distances between destinations are fixed, and so success comes down to good principles which mirror those that apply in real life.
One final bonus: my toddler loves to watch the game’s planes land and take off, and it looks awesome to boot.

Reading, TechnologyJune 9, 2016
I’ve read my share of books and articles on the current economic and political phenomenon that is China. I’m interested in part because of my own ethnicity and complex relationship with the country, and in part because its dynamics are …
END_OF_DOCUMENT_TOKEN_TO_BE_REPLACED

Computing, GamesAugust 24, 2020
I’ve been an NBA 2K player for upwards of 2 decades now. As is the case with popular video game sports franchises, the series releases a new game every year right before the season starts, with updated rosters and rule …
END_OF_DOCUMENT_TOKEN_TO_BE_REPLACED

When Clicking is Pleasurable and Addictive