Salary Requirements for a House in Silicon Valley

Kim-Mai Cutler is quickly developing a reputation as a journalist in technology who provides well-researched commentary on the industry as a whole, particularly around the issues of housing perpetrated by the current tech boom. Her piece on the effect of Facebook on housing prices around that area of the Bay Area is illuminating and shows just how unaffordable that entire area has become.
For those not familiar with the geography on the bay, the area is referred to as the SF Peninsula, and it’s a chain of suburban towns sandwiched between two freeways, the US-101 and I-280: 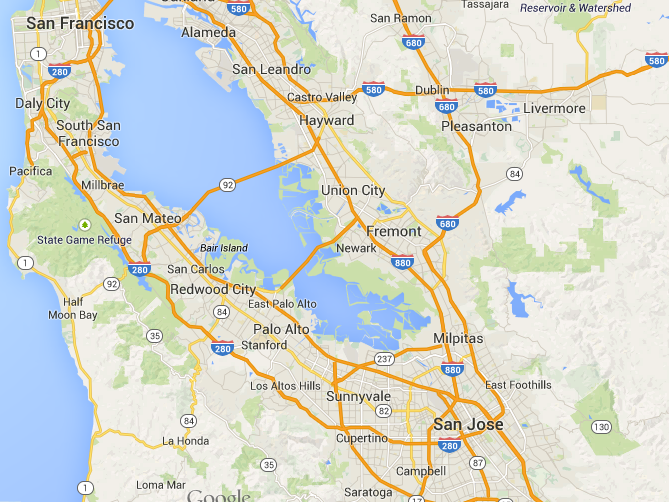 Most of these companies are located from the Palo Alto area down to San Jose. The criticism is that these towns have not really accounted for the population growth as hiring has picked up, and so the market has severely distorted the cost of housing.
I mean, look at these median prices:

There is now no city in that area (which takes ~20 minutes to drive through, so not a small one) where a house can be had for less than $1.1 million{{1}}, and given the data the entire area’s median is probably closer to $2-3 million.
I had written about this trend before, but with actual values it’s easier to reverse engineer how someone would try to buy a house in the area.

So altogether we’re looking at, conservatively, $6k a month to keep a million-dollar home in the valley living paycheck-to-paycheck. We’d of course, have to make a lot more than this in salary:

Accounting for taxes and some type of retirement savings, the million-dollar home owner will have to make a gross income of:
$6,000 / (100% – (20% + 7% + 8%)) + $800 = $10k/month, or $120k/year.
The good news is that $120k/year is mostly attainable for software engineers in the Bay Area; Glassdoor has the average at around $110k, but I suspect that the data set is incomplete and does not fully reflect the recent boom in engineering salaries{{4}}. The bad news that for non-developers and non-tech folks, this is an onerous requirement, one that becomes even more unattainable with real monthly expenses: car payments, children, perhaps a small vacation or emergency fund.
Of course, no one would actually be able to get a $800k mortgage with “just” a $120k salary alone; a more realistic debt-to-income ratio would necessitate gross income closer to $140-150k, and probably two income streams (e.g., spouses) at that. Salaries and bonuses and stock grants may be jumping higher in our current boom cycle, but a lot of it is recaptured in real estate.
[[1]]There’s one huge exception in East Palo Alto, which Kim has also covered extensively. That article is also worth the read.[[1]]
[[2]]Though honestly, 20% down isn’t that competitive when other offers are in complete cash.[[2]]
[[3]]To be fair, both the interest and property taxes can be federally deducted when filing taxes, so the true cost is actually around 70% of that amount, fluctuating based on income tax bracket. Getting that money back later doesn’t change how much you have to pay every month, however.[[3]]
[[4]]Anecdotally, the big companies – Google, Facebook, Apple, etc. – pay substantially more, but not everyone in the area gets to work for a big, cushy tech firm.[[4]]

Appreciating the Game Design of Magic: the Gathering

GamesApril 28, 2015
We moved our home office this past weekend{{1}}, and in the cleanup I came across a binder two decades old with a treasure trove of Magic: the Gathering cards. I got into the classic collectable card game (CCG) back in …
END_OF_DOCUMENT_TOKEN_TO_BE_REPLACED

Places, WorkAugust 10, 2020
It is now month 5 of Bay Area’s general Shelter-in-Place order, and even as the state and our area looks to reopen, the vast majority of companies who can still have employees operate remotely are still opting for a distributed …
END_OF_DOCUMENT_TOKEN_TO_BE_REPLACED

RantSeptember 14, 2015
Raise your hand if you’ve ever received mysterious emails or LinkedIn messages that resemble this: We’re looking for awesome [engineers / designers / product managers] to join our totally awesome team in [major tech hub]! We need you to help …
END_OF_DOCUMENT_TOKEN_TO_BE_REPLACED