Y U No Join Startup? 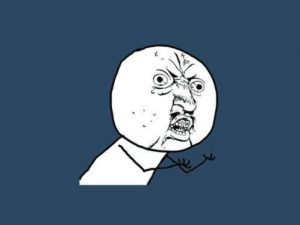 Opportunities! Learning new things! Massive impact! Changing the world! T-Shirts and foosball tables! Beer and parties! Code ninjaing!
There is seemingly an endless number of reasons to join a startup, especially now that so many exist, have a decent amount of funding and need to hire talented individuals. The self-serving message has been: startups have most of what you find in bigger companies, and are much much cooler to boot.
I’ve read this so much in the past few weeks that I wanted to play the devil’s advocate and look at it from the other side, the slow lumbering big corporation who is apparently now bleeding its employees to our heroic startups. Is the picture really that rosy?

No, of course not. Startups are great, but we should grant them the dignity of an honest comparison:

Don’t take this list to mean that I’m completely down on startups, however; twice now I’ve left a public company to join a startup, and I would certainly do it again if given the chance. A passion for the company’s products, a desire to change the world, development at a breakneck pace – these should be the reasons to join a startup. They alone do not guarantee success, but when shit hits the proverbial fan, they are welcome company indeed.
[[1]]In fact, this question posted on HN asking about their members’ exit windfalls paints a dire picture of just how little those options may be worth.[[1]]

Don’t Build for a Bubble

Reading, StartupsJune 12, 2017
The Upstarts: How Uber, Airbnb, and the Killer Companies of the New Silicon Valley are Changing the World is a journalist’s take on how Uber and Airbnb came to exist. These two startups are two of the biggest in history, …
END_OF_DOCUMENT_TOKEN_TO_BE_REPLACED