How I Evolved my RSS Reading

Ars had an article today on how RSS is no longer a sane way to consume news; I also saw Marco (of Instapaper fame) posted how he has changed his RSS habit for “sane RSS usage”, namely by using RSS for rarely-updated blogs and content.
I agree with Jacqui and Ars in that RSS was created in simpler times, before people figured out that frequent updates and scores of opinion pieces made for great page views and business. I don’t think the technology is useless, though; it’s rare to have a standard on the web become as universal as RSS{{1}}, and we should try to find ways to take advantage of the wide distribution. It just requires a dose of curation.
I’ve evolved my use of RSS over time, but slightly along a different route. The short of it: Reeder client, mostly on OSX but occasionally on the iPhone as well, checked twice a day, keeping some 30+ subscriptions (popular- and rarely-updated sites alike), and unread count kept at zero. Explanations below.
[[1]]As universal as RSS 0.9, 1.0/1.1, and 2.0 anyway.[[1]]

I can’t think of anyone who uses anything other than Google Reader anymore; it has just become the defacto standard by being reliable and including an API for developers to make better clients. Previous though, I was a power user of Netvibes, which I believe is one of the first rich web-based RSS clients. It had great features, splitting feeds into customizable panels and tabs, and later added advanced sharing too.
However, it turns out that when RSS becomes the primary news source, reliability is the most important feature. Google’s infrastructure keeps Reader always up and running, and they were smart in essentially outsourcing client development when they don’t really care to maintain their own. I’ve found Reeder to be the most elegant RSS client, but I’ve heard good things about others like NetNewsWire and some of the built-in browser readers.

The problem Jacqui had was feeling that sense of obligation when his unread feed count was staring up at him, alluring him with the possibility of even more posts. It’s just like any other digital distraction, though: like email and IM, the simplest way to keep from feeling overwhelmed is to keep it closed. You don’t feel guilty about unread posts when you don’t see how many there would be. 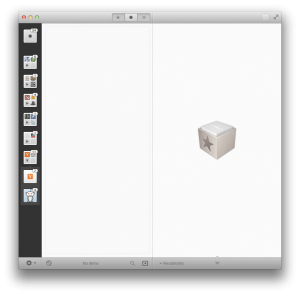 I personally open Reeder twice a day – once in the morning, and once in the evening, after the day’s and night’s interesting news have had time to collect. I skim through all the posts and mark them read (or saved in Instapaper), or if not everything then the more important categories. Reeder also allows for just a single sync when the app launches, so I’m not being continually bombarded with new items as I’m marking old ones off.

Google Reader stats are pretty awesome, and they’re there to help you figure out what you are actually consuming. For me though, I usually notice that I’m not reading posts from a specific source and remove them. It takes some time, but regular curation and refinement also helps with removing duplicate news sources (Engadget or Gizmodo, pick one), boring writers, and things that would otherwise clutter up your RSS usage.
I would think this is pretty obvious, but curation of online services is apparently not something that a lot of people do. When they complain about out-of-control Facebook friends lists, the incomprehensible Twitter firehose and RSS overload, I wonder if they’ve made any effort in maintaining their systems over time.

This is the news reader equivalent of tl;dr – skimming through titles, opening the interesting posts in a new window, and marking everything else as read. Chances are, the big news items will be reposted and commented on anyway, and what you end up reading will be either your favorite news outlet or someone’s link from Twitter.
This is where having sources split up into categories helps. Time-sensitive posts, for example, can be wiped clean if unread for longer than a day (e.g., online sales and deals); topics with a lot of overlap and echo-chamber reporting (e.g., most tech journalism and mainstream media stories) I usually glance through, looking for the single story that would provide a decent summary with some added perspective; single articles from concise authors are the ones that I like to linger on, in much the same way Marco uses his RSS. This is no worse than having to sift through stories posted by Twitter followers or Facebook friends, except that I get as much news out of 30 curated sources as someone with 3000 social media reporters.

None of these strategies I’ve presented are unique or even that insightful; in fact, a lot of them can be attributed as techniques to manage information abundance and overload in general. Personally, I’ve carried over the practice of keeping unread counts at zero over to email management (also known as Inbox Zero), and my habit of trimming RSS sources has allowed for fairly manageable friends and following lists.
And that’s the lasting, perhaps hidden value of sticking with RSS – it’s a low risk arena where you can figure out how to best deal with a relentless stream of information, where a misstep just means missing a thoughtful article.

Apps, Games, Technology, Web DesignApril 13, 2015
The web is dying? Of course it’s dying. The author of this opinion piece isn’t the first to point out that it seems like mobile apps are taking up a ton of time and attention away from “the web”, defined …
END_OF_DOCUMENT_TOKEN_TO_BE_REPLACED

The Early Life of Steve Jobs