The Value of Quora

A few days ago, I ran across this post commenting on the decline of Quora, at least in mindshare and media coverage. While this conclusion is dubious based on raw traffic numbers, my own anecdotal use has steadily declined since in the beginning of the year. 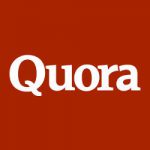 I was a late beta user on the site{{1}}. I saw the community go from a small insular group of close users – both geographically (i.e., in the Bay Area) and sharing the same interests (i.e., tech startups) – to being prominently featured in the media and moving beyond the early adopter phase, and eventually back to a smaller dedicated user base. It wasn’t as if the spartan user interface evolved during this user migration or that another Q&A service affected usage; I think it’s more interesting to think about Quora’s value proposition.
[[1]]Got in through a loophole in the mobile version of the site, actually.[[1]]

Quora is not Stack Overflow

Stack Overflow is the oft-cited Q&A service that rose alongside Quora, but the main point of similarity between the sites is that they both attract techies. Going down the Stack Exchange verticals, the topics are aligned to discrete fields on specific problems with a small number of technically correct answers. It targets those moments of “How do you do…?” that happens more than most of us would like to admit.
Quora’s focus is a lot broader and perhaps more philosophical in nature. The questions that get views and votes are the ones that strive to analyze a broad set of data to come up with a surprising conclusion or unique insight. It’s not that surprising, then, that there aren’t as many of these questions asked or answered; there simply are not as many qualified contributors. In fact, a tangential type of question popular on the site names a person of interest for his or her perspective, and while the response is undeniably valuable, whether these questions actually get a response is hit-or-miss.

Shutting down the easy user stream

Stay on Quora for a while, and you’ll start to feel a small sense of elitism within the community. I guess it was inevitable given how it developed, and the strict moderation and algorithmic changes that favored early adopters intimidated new users from participating on the site. When the site fully opened to the public, there wasn’t a rush of new users or new content.
What did bring Quora publicity was the connectedness of its early community, a lot of whom were shakers and movers in the tech. industry. Eventually these power users’ frank responses caught the attention of the media, which did their job in hyping the service but ultimately used it as an (effortless) avenue for scoops{{2}}.
The site, of course, benefitted from the attention, but started attracting users who signed up to follow the early elites, with the canonical (and ultimately, divisive) example being Robert Scoble. The newfound users were impressive in numbers but more fickle and didn’t know/respect the high level of quality that Quora maintained from the start; for a while, the site struggled with irrelevant questions, shamelessly self-promotional responses, wrapped with an abused voting system which threatened to demote the site into yet another social media cesspool.
Quora took a stance, and chose integrity over popularity, stifling users who did not follow the previous culture of meaningful answers to deep questions. There was the inevitable user backlash and some spirited debate, but the firehose of users that might have pushed Quora to a critical mass didn’t buy into the site’s mission, and post-exodus it’s had to slowly rebuild its userbase (Sadly, self-promotion haltingly made its way back onto the site).

Participation requires a lot of work

My disengagement from Quora happened gradually. For the first months, I was excited about the possibilities presented to ask and respond in excruciating detail, but over time maintaining that level of quality required an effort whose corresponding reward wasn’t immediately evident. The Quora community prides itself in promoting in-depth, detailed answers pages in length, and the time it took to write an answer was disproportionate to the attention it would receive, sometimes wholly independent of the actual quality of the response{{3}}.
On the flip side, even consuming the content stream required a serious time commitment. Quora answers aren’t quite Longreads material, but they’re still long enough to discomfort the attention span of the modern internet. Of course, when a broad question provokes a variety of answers, I mark time on the calendar to read through the top few responses. Hell, some of the more singularly impressive answers are hour-long reads unto themselves{{4}}.

Quora’s value is in its quality. To maintain this value, it has had to sacrifice “easy” gains for a hard-line stance on keeping answers relevant, detailed and thorough. Unfortunately, the service cannot force users to post quality content; early adopters like me end up disengaging after the excitement fades, and the general public isn’t even putting up the effort to start contributing.
Or maybe the initial premise is wrong: Quora doesn’t have to grow itself into a massive service to continue to be a useful resource, and is still worth periodic participation for the thought-provoking responses and subsequent debate.
That is, if you’ve made it this far, you just might be a prime Quora user.
[[2]]In the first months of the year, it felt like every other day the Business Insider, Techcrunch, and VentureBeat would spin stories out of Quora answers.[[2]]
[[3]]Some strategies to get around the quality ideal included adding random images and dropping a short response immediately after a popular question is asked (to get a few cheap early votes and stay near the top), then going back and editing in a dozen paragraphs befitting of Quora’s style.[[3]]
[[4]]The irony in the length of this post is totally not lost on me. Really.[[4]]

Readability, or the Lack Thereof

Thinking about the Merits of a Westernized Education

ThoughtsJune 14, 2021
As I’m writing this, the US has vaccinated around 40% of our overall population, and the Bay Area is doing even better at with many counties at 50% or more. With the beginning of summer here, most activities—both outdoors and …
END_OF_DOCUMENT_TOKEN_TO_BE_REPLACED

Technology, ThoughtsOctober 11, 2021
I think of myself as a technologist, someone who sees of technology as a positive force on society, the continuous endeavors that strive to move us towards better futures. It accomplishes that goal by enabling more possibility with greater efficiency: …
END_OF_DOCUMENT_TOKEN_TO_BE_REPLACED