Bejeweled Blitz (BB), after all these years, remains one of the best games Popcap has released. Both the iOS version{{1}} and the Facebook version still receive considerable play, which is pretty amazing seeing the game hasn’t been updated much over its lifetime, and Popcap has already officially superseded the game with a sequel. 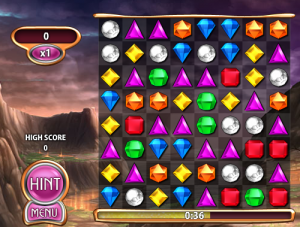 For those unfamiliar with the game, Bejeweled Blitz is a version of the popular Match-3 puzzler Bejeweled, set to a 1-minute timer and allowing for faster moves (i.e., you can flip gems while new ones are being dropped onto the field from your last move). There are special gems for matching 4 or 5 gems in a row, as well as matching a row and a column simultaneously with one move. Occasionally, score multipliers drop and will increase your score, well, multiplicatively.
Popcap makes their initial pile of money by selling the iPhone game, but reoccurring income comes with the introduction of coins into the game, purchased with money or earned via gameplay and used to buy “boosts”. Boosts give the player small advantages for three rounds: five more seconds, a special gem or multiplier at the start of the round, or a chance to mix up the board.
I play a fair amount of Blitz myself on the iPhone, and while it was immediately obvious that the game was well-polished, I’m surprised at the longevity of the gameplay and at myself for how long I’ve kept at it. After crossing a million coins earned and saved, I wanted to step back and analyze what, exactly, made the game so freaking addictive.
[[1]]As a part of the Bejeweled 2 iOS app.[[1]]

Like Angry Birds, there are a number of design decisions that work for BB.

BB makes you feel good matching gems. The tiles themselves are shiny, and they sparkle in virtual sunlight even if you just sit there and admire the screen. When you get around to actually flipping gems to get 3-in-a-row, the game plays a small chime. Chain a few more matches and the chimes raise in crescendo, until the entire screen tints red because, well, you’re on fire. If you take a peek at the score counter, it’d be flipping like a pinball machine.
If this sounds like something that you’d find at a casino, it’s because they both take a lot of the same cues, beginning with the sights and sounds.

Every game of BB starts with a different and seemingly random board of gems; as you clear matches, more random gems fall and if you’re lucky, some of them will fall to create chains. Once in a while, you’ll chance upon a multiplier or two to help in the high score chase.
Except it’s not really that random. It’s already somewhat suspicious that no starting board ever contains a match; the algorithm is obviously preventing starting the player off with points. After a few games, you’ll also notice you’ll never run out of moves, as you can always ask for a hint and get a legal move. The more paranoid players will notice that multipliers often fall close to or with gems of the same color, so that it only takes a few moves to match the multiplier gem. After a few hundred games, I’ve also noted that some games are very generous with multipliers, while others are depressingly frugal.
I can maybe rationalize that last point to chance, but it’s certain that BB isn’t giving the player a random stream of gems, and that it’s programmed to make sure the player doesn’t get stuck. Incidentally, programming the frequency and generosity of multipliers (to be non-random) is akin to setting a slot’s payout percentage, although slot machines are infinitely more cruel by teasing the player with their almost matches.

Flipping gems in BB is pretty damned fast. Good players know that they can start manipulating the board even before the announcer says “GO!”, and they also will flip multiple gems even as other gems are matching and cascading down into the gaps.
It sounds like a small thing, but making the UI and gameplay more responsive to user input – along with keeping a short timer – adds a dimension of skill to the game, something that players can strive to improve. This, coupled with the non-random distribution of gems, transforms the high score into a measurement of player skill (with some luck) instead of the regular game’s combination of persistence, patience, luck and skill.

Posting scores online isn’t anything new nowadays, but BB has a pretty solid implementation. For one, players’ scores are tracked, and the game gives out badges for high score milestones as well as experience accumulated over all games played. It’s a surprisingly full-fledged achievement system based on one high score number.
The kicker is that scores are reset each week. The game requires Facebook Connect, and uses it to show me friends’ high scores in an ongoing competition. It’s a pretty elegant way to shoehorn the power of social networking within the context of traditional arcade gaming: I’m motivated to beat my friends, and I come back to do it every week.

Paying to gain an advantage in a Facebook game is nothing new, but BB here forfeits some profit for player base, as they let players earn coins through play as well as with money, and the bonuses the player buys aren’t that extravagant but also aren’t priced unrealistically for non-paying players. As the game is just about getting a high score, there’s less of a social shame/pride dynamic provoking players to spend money, although obviously there is some present so Popcap continues to make money.
Aspiring game designers should take note. Individually, none of these things are necessarily innovative or groundbreaking, but put together they create a very compelling game with interesting gameplay mechanics, an enough but not overbearing amount of social content, and a simple monetization scheme that works off of scale. It’s a hard combination to get right – none of the top Facebook games are in the arcade/puzzler genre, although a few iOS games do similar things with their social integrations{{2}}. I’d love to see games try to execute well, instead of copying each other’s themes and adding a gimmick or two as a differentiator.
[[2]]Doodle Jump, for example, shows you other players’ scores as you ascend the level, marked at the that height so you see them as you’re leaping past them.[[2]]

GamesMay 19, 2016
I’ve been checking out Tom Clancy’s The Division for the past week or two. It’s a third-person shooter, set in a post-virus-infected Manhattan, where the primary conflict is sleeper government agents versus extremely organized looters. The story is inconsequential; the …
END_OF_DOCUMENT_TOKEN_TO_BE_REPLACED

What is there to Talk About Casual Games?

GamesMay 20, 2015
Most of the writing around video games focuses on PC and console gaming: these were the platforms that have been around for decades, which now enjoy devotees in their adult years who have the disposable income to spend. Apparently, someone …
END_OF_DOCUMENT_TOKEN_TO_BE_REPLACED

Games, StartupsJune 3, 2019
Another month, another job posting ripe for internet ridicule. In this case, it’s a job listing from the creator of Stardew Valley, looking for an administrative assistant to help him with a number of tasks while he continues to scale …
END_OF_DOCUMENT_TOKEN_TO_BE_REPLACED