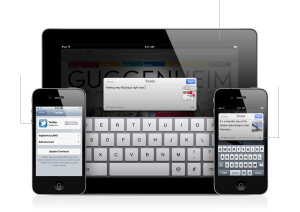 When I heard the iOS announcement this morning on system-wide Twitter integration, I figured it was a great UI move on Twitter’s part, and at the very least would get more usage from the power Twitter users.
Then I thought, why does it take an entire new version of an operating system, with dozens of app hooks, to achieve identical functionality of a web app on a desktop system? For all its touted simplicity and ease-of-use, I actually find our current trends in smartphone and tablet UI’s a step backwards, making them harder to use for extended periods of time.

Remember when blogs first got popular, and “web experts” exclaimed that the raise of the everyman blog gave the masses a voice, creating a marketplace of ideas and an exchange of content both created and consumed? It was an inflection point for the web, when the web fully embraced its role as a communications platform. The eventual coming of social networks, news feeds, and the Twitter ecosystem are more evolutionary steps that kept up the emphasis on both consuming content as well as creating it. Everything from sharing links and video clips to old-school blog rewriting feed back into the system.
And the web turned out to be a really good platform for doing this. For one, the plumbing of the web – HTML – allows for easy embedding and linking. Its openness also meant that companies built businesses around search, service, and curation. When all else failed, creating (or copying) text and media can still be done on the desktop machine you’re using to access the web.
Touch interfaces – Android and iOS – give up these advantages for a closed system of native apps. Easy embedding via a line or two of HTML becomes more complicated on these platforms; your mobile app either has some native front-end code calling a remote API, or has an embedded browser instance which you then interact with via some native front-end code. System or ecosystem-wide search is less comprehensive and segmented across app stores and platforms. And, when the OS focuses on running one app at a time (even with background processes as in Android), working across apps is either extremely painful or outright impossible.
Which is why, even with a keyboard, writing a blog post on an iPad isn’t as good as on my Macbook, and sharing an interesting article to Facebook is harder than it ought to be. At the extreme end of things, trying to code via a terminal app on a tablet is a masochistic exercise.
I think having this tradeoff makes some sense on our phones, but more because of the restrictive screen size than other hardware limitations. That tablets and soon, Windows 8 and OS X Lion, are adapting the same interface is understandable (it is the current hotness after all), but the good ol’ desktop windowing interface is still very powerful and well-suited for maintaining a connected, lively web.

HTML is Still the Great Equalizer

Computer Literacy in a “Post-PC World”

In Memory of Reasonably Priced Software