The Fresh Smell of Google+

By now, Google+ has gone through:

The general consensus seems to be Google has finally got something worth using as a social platform, with good product decisions, UI/UX design, and synergy across properties (starting with that unified toolbar at the top, what we called the sandbar). There are a lot of people excited – or at least interested – and asking for invites into the new hot social network.
And being a Google alumni does have some advantages, in this case getting fairly early access to Google+. It’s not everyday that one gets to see an empty page crest into an avalanche of comments and posts.
[[1]]The initial versions, from what I remember, had the Circles concept down but most of the other features weren’t flushed out or as consolidated.[[1]]

One of the things I noticed initially was how AJAX-y the interface is; all changes happen in real-time, and state (e.g., notification counts) is properly updated upon user actions. According to a Googler, the front-end was built in Google closure – pretty surprising, given how well the client-server interactions work, although it does show the library’s strengths in event-driven programming. The experience is very much on par with native applications.
Of course, with no one in my immediate network for the first 12 hours or so, Google+’s main attraction was its Sparks feature, which is essentially a news search plus feed reader. To give them credit, Sparks work as you’d expect, and in my brief usage it does seem to surface a few interesting articles. If nothing else, the feature provides an innate level of site stickiness similar to the value generated by Facebook’s app platform (i.e., games) though nowhere near the level of attraction.
Once Google opened the invite lock and other people started wandering onto the network, everybody gravitated towards setting up circles. The project managers have done something pretty clever here: the process of adding people to circles feels like a game, complete with cute animations and a little “+1” bubble that would make Mario proud.
That said, it’s a little disappointing that everywhere else in the app, Google+ retains the “pick from a list” interface that is nowhere as fun. Thinking and checking off items from a list on posting and sharing items is a chore, and giving user-interaction the same kinds of “rewards” would encourage users to be more granular, otherwise users may very likely revert to Facebook/Twitter behaviors and just let every post be public. Further down the line, the other issue I can imagine is circle maintenance; will users be compelled to keep their circles up-to-date? If email mailing lists are any indication, you may be stuck forever in the “pregnant” group.
The other big feature is hangout, which is the video group chat with smart screen switching. The technology aside{{2}}, what’s interesting is that hangouts are featured in the stream and users are almost shamed into joining one if they see a bunch of people there already. Out of all the features in Google+ that try to make a digital analogue of reality, I think is this the one most detached; it’s really unclear whether people will make regular use hangouts, and aside from an initial hangout done for novelty, there have been a few unsuccessful and desolatingly lonely attempts to use the feature. 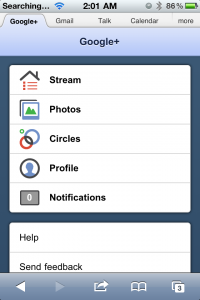 Finally, I really like the photos feature. A fair amount of Facebook’s success was attributed to its photo galleries married with social sharing, even though the product itself has never been that good. That Google can leverage Picasa – which I see as on the same level as Flickr, albeit more expensive – from day one is awesome, and it has already caught up in social features (e.g., face tagging and inline commenting) while exceeding in photo features (e.g., EXIF data, filters, photo size).
And I know there’s a bunch of mobile integration features Google+ is pushing as well, but unfortunately they haven’t released an iPhone app yet. I just checked out their mobile webapp, however, and it’s a fully fleshed-out mobile experience, with same posts, photos, circles and streams available on the desktop (though I doubt hangout would ever work). It really speaks to the amount of effort Google has put towards making this release polished from all fronts.
So the pertinent question to ask is whether people will continue to use this, and whether that means keeping a duopoly of social networks in Facebook and Google+ or abandoning Facebook altogether. I’m not the first to draw the parallel between Myspace{{3}} and Facebook circa 2006-2007, but that’s an oversimplification: the market is different, the companies are different, and the criteria for success for either company is also up for debate. Hell, maybe the market can tolerate multiple social networks, each specialized to their social niche.
But, at least for the next few months and/or years, it’ll be an epic battle.
[[2]]Much has been made about how the screen focuses on the person talking, but I don’t find analyzing audio levels being that amazing. Google also has the same feature in its internal video conf. systems, so maybe I’m just used to it.[[2]]
[[3]]Speaking of Myspace, the timing of their painful sale amidst this revival of the social network battles is tragic.[[3]]

Management, RantAugust 9, 2021
A while back, I happened upon a Twitter thread about incompetent management that I found, initially anyway, quite insightful. First-time founders, CEOs, and even employees should understand the playbook of the Incompetent Leader (IL). The IL is savvy & charismatic, …
END_OF_DOCUMENT_TOKEN_TO_BE_REPLACED

The Folly of Stack Ranking and Measuring Impact

Management, RantJuly 25, 2016
Recently I came across a brief statement on Facebook about the well-explained evils of stack ranking, with a half-hearted Devil’s Advocate argument about how impact can absolutely be an objective metric, measured and ranked. I still think this is completely …
END_OF_DOCUMENT_TOKEN_TO_BE_REPLACED

Computing, RantDecember 10, 2018
It’s true what they say about working with other smart people; you end up learning a lot from observing their work and perspective. Early on in my time at Square, a bit of pair programming with a couple of great …
END_OF_DOCUMENT_TOKEN_TO_BE_REPLACED